It is not WHAT we say that makes people move, but HOW we say it. That was, roughly, the conclusion of a seminar held in the mountEE-municipality of Jokkmokk the north of Sweden, 2-4 of February 2015 on the topic  “Communicating Energy and Climate Science”.

Here some ideas on how we can do a better work on spreading the news of energy efficiency:

Cool headlines: “International environmental law on arctic resources” or “Who owns the arctic oceans”. Which of the seminars would you choose? Both have the same topic!

Seek primitive driving forces: E.g. The possibility to “collect” like a squirrel: Could it be that the production of the energy needed for your own household at your own roof is irresistible just because it appeals to a very primitive force to collect? Can you think of any other driving forces as effective as this?

Less of “what we know” and more of “how” we know. The “Fossil free” – campaign and the “Divestment” campaign are examples that make it easier to become an activist. Read more on 350.org.

Include creative people. Science on energy savings often boils down to technical solutions – quite uncool for most of us. Mix energy experts with lots of creative people and challenge the system!

Spread the word: Put the science center where people move! How about building a lab in a shopping mall? Blogging is another great way to spread new science, but be aware that every entry has to be announced on twitter, facebook or other social media.

Use science communication to fund science! Do like the Arctic Center at the University of Lapland and use 1/3 of your budget on communication. Funds for communication are quite easy to access and give additional value to what you do. With 1/3 of the staff working on communication you get a realisitc chance to move people! 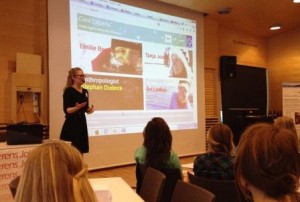 The Arcitic Center uses storytelling to make science enjoyable for everyone.