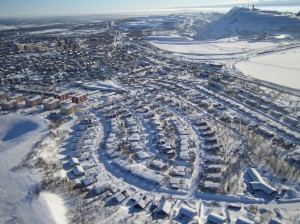 The construction company NCC is building passive houses in new Kiruna. The house will be completed in September 2014. The construction is a spin-off effect of the R&D project Attract where LTU researchers and enterprises produce goods and services that meet the evolving needs of the new city of Kiruna.
Passive houses, or low-energy houses , are warmed up by body heat , electrical appliances, lighting and solar radiation and therefore need very little added heat energy. In Kiruna winter is long and dark and the sun shows itself rarely .
NCC aim is to build a passive house with district heating as an energy source , a house that can hold its own energy supply even in environments with arctic climate. The house becomes the first passive house in these latitudes.
– We want to show that it is possible to build a passive house even in such a demanding environment as Kiruna , says Jan Byfors , director of technology development, NCC and adjunct professor at the Luleå University of Technology. Combining this with district heating is extra interesting. Then you need the wires are not buried as deeply.
Mats Nilsson, Technical Office in Kiruna AB, sees more advantages of using district heating in passive house as the heat recovered from waste from industry , minimizing the use of electricity. The seventh house as the building has been named , will also serve as a research laboratory.
LTU- researchers are installing the equipment  that makes it possible to study the technical solutions ecological footprint  and conditions for building efficient and energy-saving in extremely cold environments.
The research performed  in the seventh house is within the research project Attract focusing on moving the cities Gällivare and iKiruna , involving multiple research groups at the university.