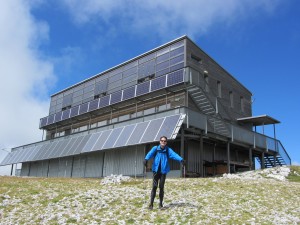 Today it is possible to build a Passive House on high Alpine levels, more than 2000 m above sea level! During my summer vacation in Austria I had the possibility to combine a hiking tour to the Hochschwab summit with visiting the Alpine refuge “Schiestlhaus” of the Austrian Tourist Club which is situated at an altitude of 2154 m above sea level on a plateau directly under the main summit of the Hochschwab (2277 m).
The Schiestlhaus is the first large mountain refuge built to passive house standards with the capacity to accommodate 70 people. The south-facing facade has been designed as an energy-facade system and is the main energy supplier of the building. The upper story features 46 m²of facade-integrated solar collectors for the generation of thermal energy.
Key figures: 550m2 effective area (including basement), 70 beds, 160 seats including the terrace.
Heating system: Heat supply and storage is effected by means of three buffer, storage tanks with a total capacity of 2,000 liters which are fed, for the most part, by the facade integrated thermal collectors. Heat supply relies on the following system. The solar c 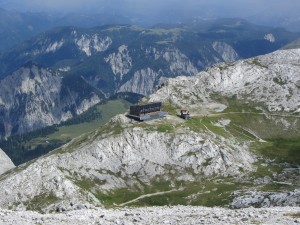 ollector transfers heat via heat exchanger to the buffer storage tanks. A rape oil operated unit loads heat directly into the buffer storage tanks. The solid fuel range can also transfer heat into the buffer storage tanks.
Architecture: Architectural and the overall building concept were based on the principles of solar building construction. The building site near the top of the Hochschwab Mountain permitted a clear southward orientation of the building and thus the active utilization of solar irradiation, which is particularly favorable at this altitude. Technically, the concept follows passive house standards, and is adapted to meet the meteorological and geological requirements prevailing in alpine regions. From an economic point of view, logistics and the weight of building components were important issues. Designers developed a clear-cut principle of construction and a simple structure with prefabricated building elements, which can be realized within short building and assembly times.