24 politicians, civil servants and experts from Sweden (Dalarna, Norrbotten and Västerbotten regions) with background in construction visited Austria’s westernmost province of Vorarlberg as part of the MountEE project. Vorarlberg is well-known as a model region for sustainable and energy efficient construction in Europe. Today, large parts of all new buildings are built in passive house standard and almost 100 percent of the public buildings. 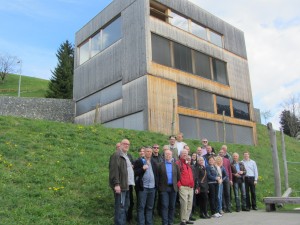 The first property to visit is the town hall in the small municipality Lorüns which has 300 inhabitants. Mayor Lothar Ladner explained why the municipality decided in 2011 to build in passive house standard: There was a clear expectation of the citizen that the municipality goes ahead by taking its energy and climate responsibility. And the decision was easy as there was a regional subsidy to build in passive house standard, compensating the slightly higher investment costs. Beyond, operating costs are low, which favors municipal budget directly. The town hall is built of untreated wood, which comes from the municipal forest. Local companies have been commissioned as much as possible, and a close cooperation between all parts of the building chain guarantee for that there is now a good knowledge of passive houses at the local level. 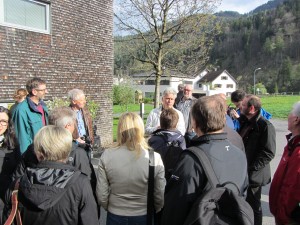 The same thoughts and ideas can be found even in other smaller municipalities, such as Raggal and St. Gerold, when they built their town halls which have been studied by the MountEE group, too. And all share the same challenge: summer heat. Ventilation is usually dimensioned not to the maximum number of people, but to the number that is most common to be in the rooms. That makes the building cheaper and pulls down the energy consumption, but can be too little sometimes.

Even two renovation projects were part of the visit: School Giessen in Vaduz in which consumption has been reduced from 151 kWh/m2 to 51 kWh/m2. The specific challenge was to maintain the 50’s and 60’s design, which was successful. And the UNESCO elementary school Bürs, where energy consumption was reduced from 135 kWh/m2 to 7 kWh/m2 (calculated value, assuming that it will be around 20 kWh/m2 in reality), while the target was to provide a good teaching environment at the same time. This target has been reached excellently. The tour was complemented by a visit of an apartment block in Nüziders, where already 20 years ago an energy consumption of 59 kWh/m2 could be achieved. It was a great example to highlight opportunities in building long-term with e.g. a maintenance-free wood facade. 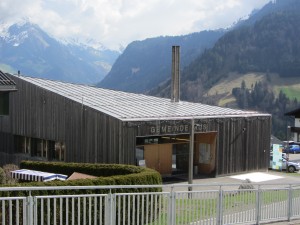 An important lesson for the group to take home to Sweden is the need for a clear political commitment to sustainable building and passive houses. Grants for those who build low energy houses or passive houses have been important. But maybe even more important has been a clear guideline and supporting structure, that helps especially smaller municipalities to succeed: For about 10 years Umweltverband Vorarlberg, Energy Institute Vorarlberg and a little bit later Spectrum started to build up a support for smaller municipalities, a service package. MountEE project works for to adapt the Austrian service package to Sweden to offer tailor-made solutions for specifically smaller mountain municipalities in transferring their buildings into NZEB.