An architecture competition for a new city hall in Kiruna was held and is now decided. The winning proposal comes from Henning Larsen Architects from Denmark. The competition program included a number of requirements which the contestants had to achieve, including MountEE energy and environmental criteria. All proposals were analyzed by different experts, among others a passive house expert, to assess whether the proposals are fulfilling the demands. 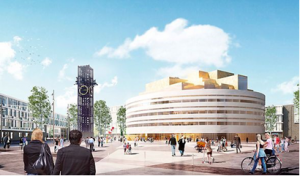 The results showed that many of the proposals had major flaws, mainly with regard to energy efficiency and adaptation to the northern climate of Kiruna. The jury considers the winning proposal being able to meet the requirements but some revisions are needed.

Now a year of planning is following where the consulting team will face the challenge of achieving an energy consumption of 50% of the building standard. This would mean an energy demand of 60kWh/m2 and year in Kiruna. A further challenge is to stay within the budget. Not an easy thing to do! Building works are scheduled to start in November 2014, and the building should be ready in October 2016.

Here you will find the description of the winning proposal: http://www.arkitekt.se/s78814